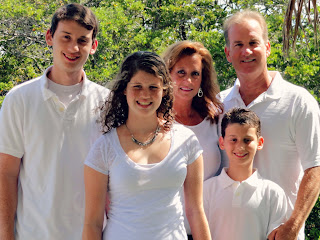 Our journey began four years ago when Brenna was 10 years old. She had a bad virus which resulted in hemolytic anemia. She was hospitalized, given blood transfusions and steroids. Doctors assured us that it was a freak thing, and that it would never happen again.

Fast forward--two years later...Brenna was 12 years old, Zach 16, and Jared 9. My husband and I took the kids to a beach for vacation that August. Brenna started to have bruises pop up, and purple dots on her legs, arms, and the inside of her mouth. She also started her first period, and was bleeding heavily. We took her to an urgent care clinic and they sent us for blood work.

The doctor called our rented condo and told us Brenna's platelets were 2,000, and her hemoglobin was 5. He told us to go to the nearest hospital, and that we would be transported two hours away to a children's hospital. I went into shock and started packing up our clothing for the trip. My husband drove us to the hospital. We went on to the children's hospital, and Bill went back to the condo to stay with the boys. We were about 11 hours from home, and I had no idea what was really happening with Brenna. I just knew it wasn't going to be good.

Once we arrived at the children's hospital, they started two IV lines to give Brenna blood, platelets, estrogen, steroids, and IVIg, plus some other things to try to stop the bleeding. She was hemorrhaging: It was more blood than I had ever seen. The doctors said she lost all of her blood volume.

To make matters worse, my youngest son had a seizure that same night. He'd had one other seizure the year before. When my husband called and told me about Jared's seizure, I broke down.

My parents drove down and picked up the boys. Bill came to the hospital to be with Brenna and me. It was 6 days before Brenna was stable enough to make the trip home.

Brenna remained on steroids and was repeatedly hospitalized for IVIG and other treatments before she went into remission three months later. She missed 67 days of school that year. Our lives had become a living nightmare, and we have been riding a roller coaster ever since.

Brenna was diagnosed with Evans Syndrome and Lupus. She has chronic hives, chronic fatigue, and is frequently too dizzy to function. She has also developed depression and anxiety issues. She is very worried about starting high school this year, and missing days due to being sick. This is so overwhelming at times, and the worry and stress I have for her consumes me. I try to stay positive on the outside, but seeing my daughter suffer tears me up on the inside.

I keep all who are suffering with Evans Syndrome and Lupus in my prayers, and pray that there will someday be a cure for autoimmunity.

To parents who are dealing with this: I think our strength just comes from God, as difficult as it is at times we have to be strong for our children. We can curl up and cry when we are alone, but when we are by our childrens' sides, by their beds, in hospitals, during doctors appointments, we have to be their advocates, their rocks! Stay strong--You're not alone!

Who is the Evans Syndrome Community Network?

Evans Syndrome Community Network
We are people whose lives have been touched by Evans Syndrome. Here you can read our stories, poetry, and words of inspiration. We come together to share encouragement with each other, and to educate our communities about the dangers of anemia and a low platelet count.

Have you been told that you or your child is anemic?

Have you been told that you or your child is anemic or that you have "iron-poor" blood? If your answer is "Yes," please find out the cause of your anemia. Be proactive in your own medical care. Don't accept age, gender, or lifestyle as an answer for why you're anemic. It could make a difference between life and death.